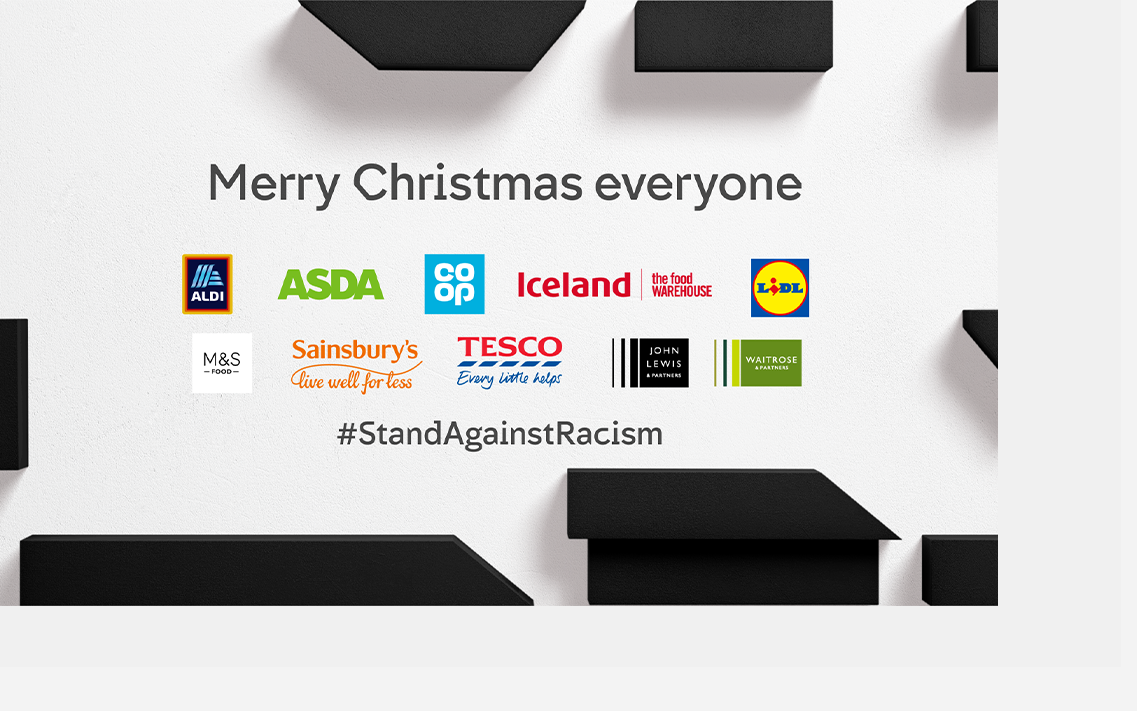 Channel 4 and the UK supermarket sector is standing together against racism in an unprecedented show of unity across two entire prime time ad breaks on Friday 27th November 2020.

Sainsbury’s recently launched the first in a collection of nostalgic Christmas adverts which tells how a father and daughter’s excitement for Christmas gets them talking about Dad’s gravy and his ‘famous’ gravy song. It features a Black family which some people reacted to by posting offensive and racist comments on social media. It is not the first supermarket ad campaign to receive hateful abuse on social media. 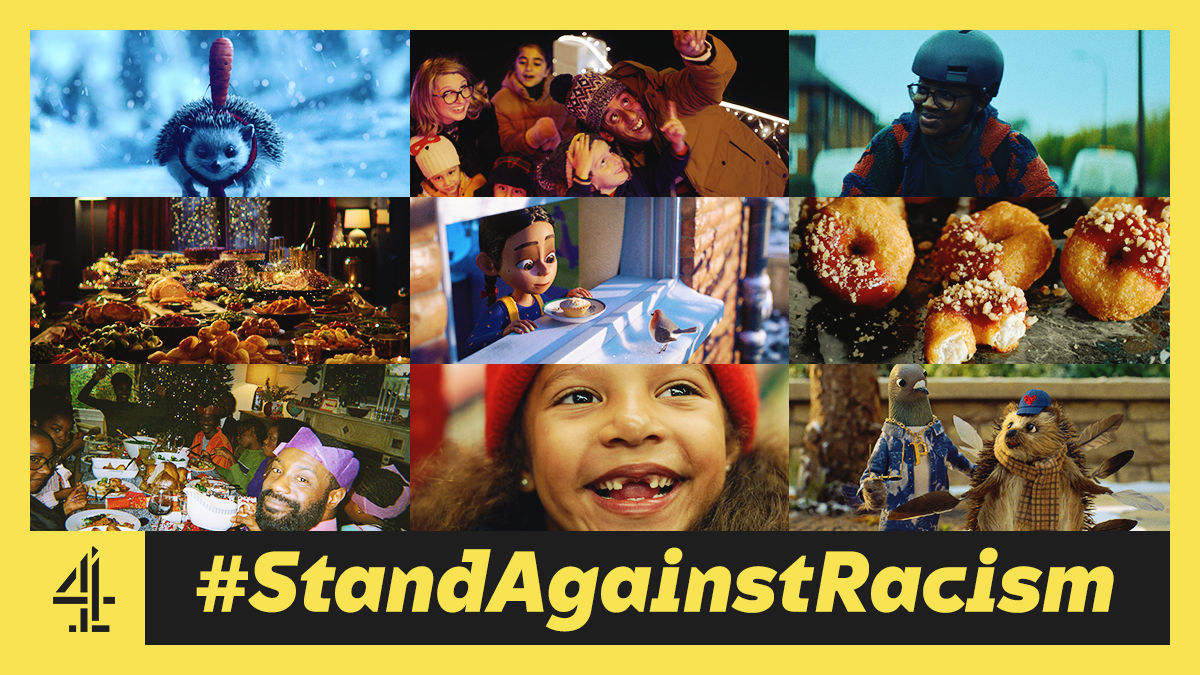 The exclusive ad break takeovers mark the first time the supermarkets have come together in this way and will air at approx. 8.15pm during Bake Off: An Extra Slice and at 10.15pm during The Last Leg, both featuring the 60 second version of Sainsbury’s’ ‘gravy song’ advert.

Ads from Aldi, Asda, Co-op, Iceland, Lidl, M&S, Tesco and Waitrose & Partners will be split across the two breaks, airing one after the other – something the supermarkets would usually actively avoid. The activity will carry the hashtag #StandAgainstRacism.

The bespoke Channel 4 introductions will explain to viewers that ‘Channel 4 stands up against racism. After the reaction to this year’s Sainsbury’s Christmas commercial, retailers have put their usual festive rivalries aside across two ad-breaks tonight to stand side by side with us too.’

The brands are also standing together on social media where any activity will carry the hashtag #StandAgainstRacism.

Steve Murrells, Co-op CEO said: “At the Co-op we won’t stand by when we see racism happening and we’ll speak out and act against it. I am crystal clear that we must be Anti-Racist in everything that we do and we’ll work to eliminate individual, institutional and systemic racial inequalities that currently exist. We are proud to stand in solidarity with our peers.”

Stuart Machin, Managing Director of Food, M&S said:  “We’re with you Sainsbury’s. Christmas is about bringing everyone together, and we absolutely stand together against racism with our fellow retailers.”

Rachel Eyre, Head of Brand Communications and Creative at Sainsbury’s, said: “We strive to be an inclusive retailer and we’re proud to unite with our industry colleagues to stand up against racism. We’re passionate about reflecting modern Britain and celebrating the diversity of the communities we serve, from our advertising to the products we sell. Sainsbury’s is for everyone and we are committed to playing our part in helping to build an equal society, free of racial bias and injustice. With collective action, together we can drive change.”

Alessandra Bellini, Chief Customer Officer at Tesco said: “At Tesco, we believe that diversity in our business makes us stronger and our advertising campaigns are designed to represent everyone, showing the breadth of the communities and customers we serve. We do not tolerate racist or abusive behaviour of any kind and we are proud to be working with Channel 4 and other supermarkets to #StandAgainstRacism.”

Martin George, Customer Director, Waitrose, says: "The John Lewis Partnership was formed with equality for all at its very heart and we're proud to stand against racism with Channel 4 and other supermarkets. We want Partners and customers from all walks of life to feel valued for their individuality and share a sense of belonging. We've already shown support for the Sainsbury's ad with our campaign #GiveALitteLove for celebrating a modern Britain and for highlighting the diverse range of communities we serve." 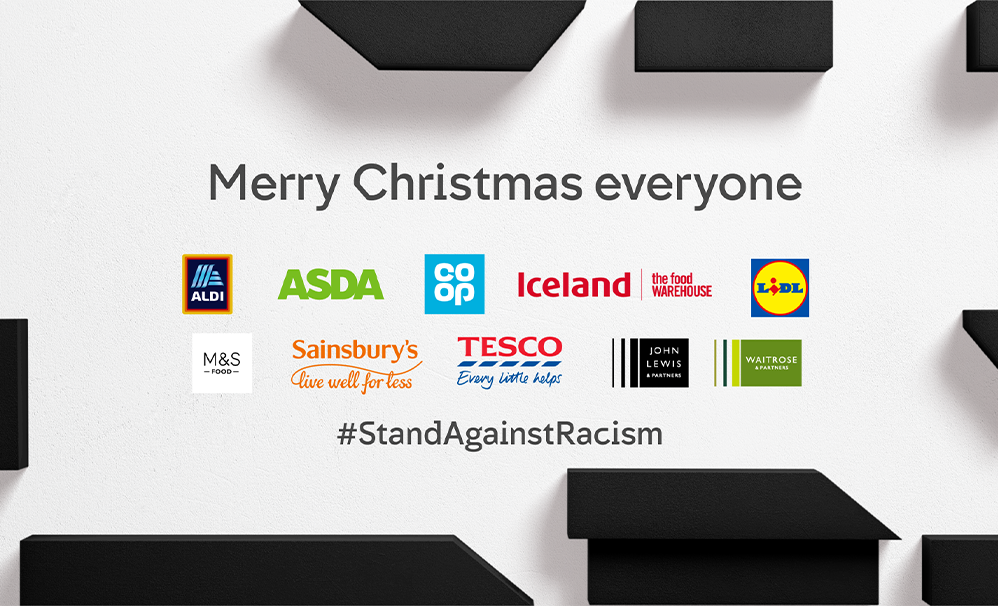 Verica Djurdjevic, Chief Revenue Officer, Channel 4 said: “As an anti-racist organisation we are incredibly proud to stand together with Sainsbury’s and our retail partners against racism, using our national platform to call out the unacceptable reaction to Sainsbury’s Christmas advert.”

#StandAgainstRacism has featured in Campaign Magazine, The Drum, Marketing Weekly, ITV News, Daily Mail, The Metro, Evening Express, The Independent, The Grocer and many more.

So did the following noteworthy individuals: